On 28 April 2021, STRIA South Transdanubian Regional Innovation Agency Nonprofit Ltd. organized the third stakeholder meeting within the framework of the eBussed PGI05948 INTERREG EUROPE project (https://www.interregeurope.eu/ebussed/) with the participation of the stakeholders. 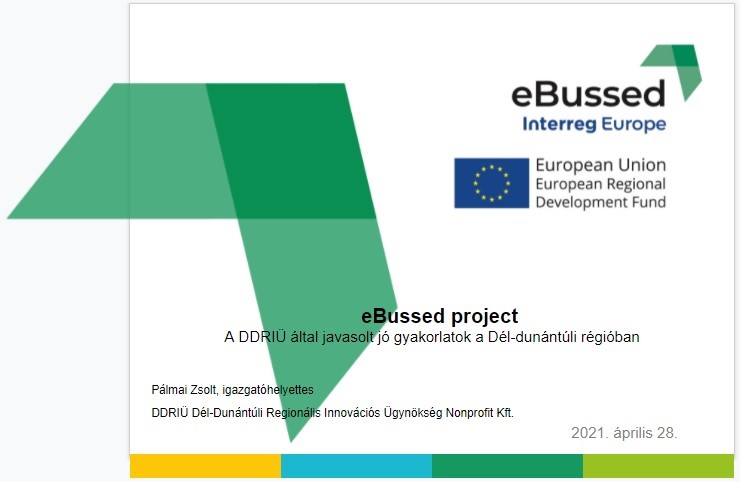 The online session presented the good practices proposed by STRIA from the South Transdanubian region.

Zsolt Pálmai deputy director (STRIA) opened the event. He presented shortly the previously assigned agenda then he demonstrated the aims of the project, background information and the partners.

Following the presentation, Zsolt Pálmai asked for the partners’ opinion about the good practices described.

Tamás Tavi, former director of operations and development (Tüke Busz Zrt.) informed the participants that TÜKE Busz Zrt. had already raised the issue of e-buses and this strategy at the conceptual in 2016, and the current procurement of electric buses in Pécs was based on this, so the plan was a precursor of it. He highlighted the preliminary consultation with the management of MVM Next Energiakerskedelem Zrt., MOL Nyrt., Pécs Thermal Power Plant and E-on Zrt. and bus manufacturers, the consequences of which were included in the strategy.

Tamás Tavi and Ákos Horvát (BKV Zrt.) also raised the issue of training and drew attention to one of the main shortcomings, which is the lack of proper regulation for operators and maintenance staff. In addition, more IT specialists, electrical engineers, mechanics and maintenance staff are needed.

Finally, as a general comment, János Szász, an external expert, proposed to collect bad practices to be avoided and outlined alongside good practices.

More information about the project: (https://www.interregeurope.eu/ebussed/)

The eBussed project is co-financed by the European Regional Development Fund and Hungary.